Having released what really must have been every last possible studio and live recording by their most famous artist, Impulse (and their now vast array of parent labels) continue to expand their John Coltrane catalogue with a near scraping-through-the-barrel approach. However, because of the man himself, and of everything he put into his playing, some very worthwhile jewels are still to this day inching their way into the light. 'The Olatunji Concert: The Last Live Recording' though is clearly not one of these.

Recorded late April 1967 in a gym (yes, a gym) in Harlem, just three months before his passing, it genuinely is one of the very last times that the great man would appear on stage, if not the actual final performance. The title however is not incorrect, as it is highly unlikely that a later live recording exists. Typical of his recorded and live output of the time, your opinion of the music here then depends largely on what you think of his then 'spiritually emotive', or simply very loud, playing style.

Backed by pianist and wife Alice, long time bassist Jimmy Garrison and drummer Rashied Ali, Coltrane leads with fire alongside Pharoah Sanders, and the energy and sweat created by all five is absolutely palpable. Just. Recorded for the most part through what sounds like two failing microphones, the sound is that of a middling bootleg, with frequently uneven levels and a few occasional tape failures to match. Worse still, the venue and its acoustics sound terrible (as they would do in a gym), and the two horn players' epic over-blowing comes off the worst, thanks to some bad over amplifying. Near hilariously too, one of the sometimes-on-sometimes-off microphones even catches some exterior noise from the streets outside.

The music itself however hardly 'suffers' at all from any of this. Violent and dissonant, you'll struggle to find anything approaching melodic here, despite the appearance of 'Trane's usually wondrously beautiful version of the classic 'My Favourite Things'. The take on the piece here bears little resemblance to the familiar reading, with Sanders pretty much leading the way with his high-pitched screaming and wailing, while Coltrane merely sits behind and mimics. None of the instantly identifiable melody is present for the first twenty minutes, and at the point at which it does finally come in you'd probably still be hard-pressed to name the composition, buried as it is in the spiritual free-for-all freak-out of, well, everyone on stage.

As an artefact of the final stages of Coltrane's career, after having forsaken both his famed 'sheets of sound' and half of the 'classic quartet', and now embracing the more extreme inner-depths of the avant-garde, it is an informative recording, showing where he and his band were at, with the heavy blasts of very free jazz and raw aggression becoming more and more headstrong, powerful, and of course, much more cacophonous. For fans of this era, especially for any who value 'Om', if your rabid thirst for all things 'Trane still remains unquenched, then here is your oasis. For the average, or at least less dedicated, fan too it gives them much easier access to what the dedicated collector often looks for – a lost recording, historic perhaps, made in less than excellent conditions with a decidedly poor mixing job – but at an affordable price.

On those terms it of course succeeds, but approached as it should be, solely on a musical level, there is nothing familiar or warm, to embrace or to love, leaving instead just waves and waves of ugly sonic noise. To be avoided by all but the most enthusiastic 'Trane-heads. And even then, great caution is still advised and recommended. 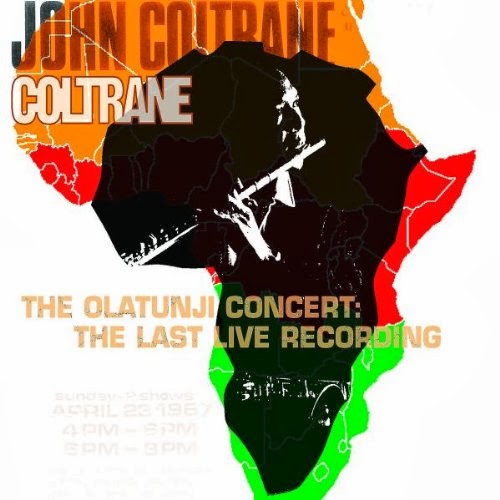 Email ThisBlogThis!Share to TwitterShare to FacebookShare to Pinterest
Labels: John Coltrane, One Star