'Oblique' is probably my favourite Bobby Hutcherson album of the sixties. Odd then that it sat in the vaults unreleased for almost 15 years. Such is the way of prolific Blue Note recording artists... 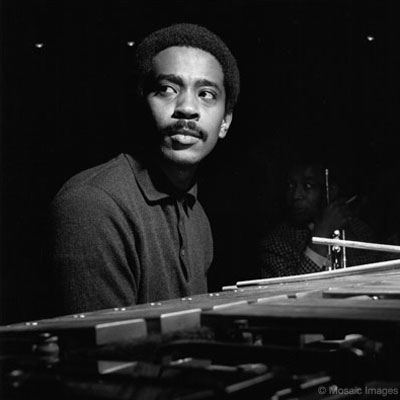 ‘Oblique’ was Bobby Hutcherson’s second session both leading a quartet and attempting a more commercially viable take on his normally more avant-garde stylings. Sharing three-quarters of the band from ‘Happenings’, Herbie Hancock and Joe Chambers both make a welcome return, while Albert Stinson replaces the more well-known Bob Cranshaw on bass. Not that this should be seen in any way as ‘Happenings 2’; here there’s much less focus on Hutcherson the composer, with Hancock and Chambers both contributing - for the better - and also whereas before everything both benefitted and suffered from a little too much simplicity, ‘Oblique’ revels in it’s greater complexity.

The opening sweet samba-light ‘’Til Then’ sounds, at first glance, like a simple number, but underneath there’s a huge amount going on, and both the vibes and the piano get some exhilarating solos. As does ‘My Joy’, which starts at first as a waltz, before moving into a harder territory, and serves as a perfect launchpad for a blinding solo by Stinson.

The third piece though raises the bar. Hancock’s classic ‘Theme From Blow-Up’ is given perhaps the most straight jazz reading that he was ever involved in, with some stellar complementing between Hancock and Hutcherson, and the only real downside being that it highlights just how much stronger the pianists compositions are than that of the bandleaders.

‘Subtle ’ returns to samba and gives the vibesman his best solo of the album, while intriguingly Hancock delivers his worst. Not outright bad, it’s merely long and winding without really adding anything. Afterwards though, we hit the double winning hit of the title track and ‘Bi-Sectional’. ‘Oblique’ is the emotional peak, with thoughtful traded moves between piano and vibes, while ‘Bi-Sectional’ begins almost playfully, before Hutcherson and Chambers begin a full-on percussion attack.

Bobby Hutcherson’s ‘Oblique’ is along with ‘Happenings’ only one of two quartet dates he recorded for Blue Note, but unlike that earlier album, was another of the label’s sessions that stayed in the vault until 1980 for it’s first release – and then only in Japan. And the truth is, it’s actually a far superior date than ‘Happenings’, boasting greater energy, creativity, compositions and even band. Albert Stinson is a wonderfully inventive player, who if listened to closely is doing a great many things under the rest of the band. Tragically, he would die only two years after this recording, aged just twenty-four.

One of Hutcherson’s greatest albums, its infrequent availability only serves to heighten its status. Not that it needs it by any means; the whole recording is a clear winner from start to end. Anyone with any interest in Hutcherson at all should seek this perfect five-star session out immediately.